Did you know that silver prices have outperformed gold almost every time during periods of rising gold prices since gold prices were freed from their dollar peg in 1968?

In the third week of July 2020 silver prices broke out of the $14 to $20 price range in which they have been caged for the most part since the second half of 2014. After breaking out of this long held range, silver prices raced sharply higher, rising to an intraday high of $29.91 on 7 August basis the nearby active September Comex contract. If past performance is any indicator, this could be the start of another sharp run up in silver prices. And past performance has been a fairly consistent indicator in illustrating that silver prices outperform gold in a time when gold prices are rising sharply, a gold price rally. 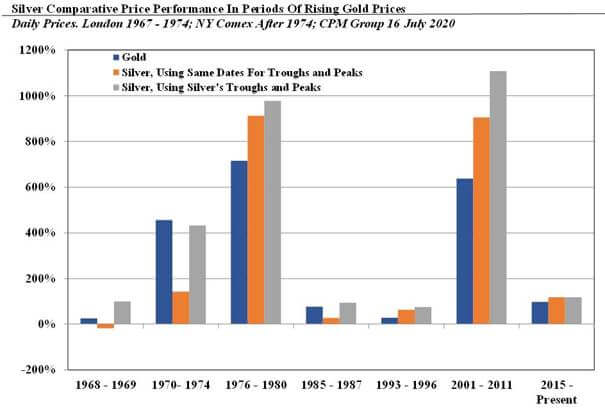 There are several reasons why silver often lags gold in starting a major upward price move, but then rises faster in percentage terms. One of the most important is that the silver market is significantly smaller than the gold market. In 2019, for example, the dollar value of the gold market was around 5.5 times that of silver.

Given the smaller size of the silver market it takes less effort for investors to move the price of the metal higher or lower. The smaller size of the market essentially increases volatility, which while supportive of outperformance compared to gold when prices are rising also adds risk to the performance of silver as a stand-alone asset and to any portfolio in which precious metals are included.

Also, while the silver market is very liquid, it is relatively less liquid than the gold market both in terms of depth and breadth, with fewer institutional investors, retail investors, bullion banks, and trading companies interested in the silver market versus gold. This lack of liquidity also contributes to sharper moves in silver relative to gold.

Some not all, gold investors jump the gun on buying gold at the first whiff of economic or financial market troubles. Other gold investors and silver investors as a group appear to be more circumspect and hold their fire for a while longer. Furthermore, silver investors repeatedly have demonstrated a willingness to sell their silver when the positive sentiment toward the metal fades.

This asset class will clearly outperform Gold in ROI percentage terms during profit-taking when economic and financial markets regain investor confidence. It would not harm to invest in Silver now!

Gold rises as the Fed signals rates near zero indefinitely

5 things to know before the World Market opens 17th May2022

Is it a good time to invest in gold?